Against a background of extraordinary epidemiological measures, political crisis and mass civil protests, July 2020 turned to be an extremely productive period for legislative activity. The unusually increased activeness is clearly visible compared to the previous months of 2020.

Table 1. Number of bills submitted to the National Assembly categorized by months and by sponsor for 2020

A possible reason for the increased work flow could be the summer parliamentary vacation, which is traditionally held in August. However, when reviewing the number of bills submitted to the National Assembly in July, for the last 10 years, this year’s results hold the honourable second place.

Table 2. Number of bills submitted to the National Assembly in July for the last 10 years, categorized by sponsor

The beginning of the intensive July legislative activity in a seemingly inexplicable way coincides with the protests against the Government and the Prosecutor General, which began on the evening of 9 July 2020. For the period 10-31 July 2020, 29 new bills were submitted to Parliament, only 5 of which by the Council of Ministers. It is a curious fact that on 10 July 2020, the day after the first night of the protests, an unprecedented number of bills per day (7) were submitted and all of them by MPs.

The “most popular” areas of regulation in this period are:

The above data once again demonstrate and confirm two phenomena which have already turned traditional for Bulgarian political life:

These phenomena are largely indicative of the extent to which the current legislative process is protected against subjective influences, expressing interests different from those of the society and the extent to which this process contains means or mechanisms to ensure objectivity in legislative decision-making. The result is legislation of poor quality, which inevitably leads to negative consequences for a wide range of stakeholders. This conclusion is supported by entirely independent, external and official sources, as well.

The European Commission published its 2019 Annual Report “Monitoring the Application of European Union Law” on 31 July 2020[1]. Fully in line with the above conclusion of poor legislation and quite expectedly, the number of open infringement procedures against Bulgaria for the period 2015 – 2019 is steadily increasing.

More interesting, however, is the fact that the main reason for initiating infringement proceedings against Bulgaria is the late transposition of the EU law in the Bulgarian legislation. 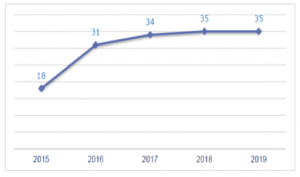 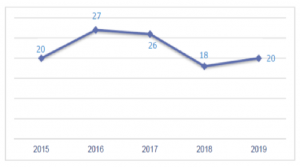 The data on the infringement procedures against Bulgaria for the last five years are a solid quantitative indication for the low efficiency of the legislation adopted in our country against the indicator “compliance with EU law”, especially considering that the harmonization with the requirements of EU law is a favorite argument of both the Executive and the MPs for initiating legislative proposals.

According to the same report, the areas in which the Bulgarian legislation is non-compliant with the EU Law have an extremely wide scope of matter, including not exhausting all, the following:

[1] Available at: https://ec.europa.eu/info/sites/info/files/file_import/report-2019-annual-report-monitoring-application-eu-law_en.pdf; Detailed information on Bulgaria, available at: https://ec.europa.eu/info/sites/info/files/file_import/report-commission-2019-national-factsheet-bulgaria_en.pdf