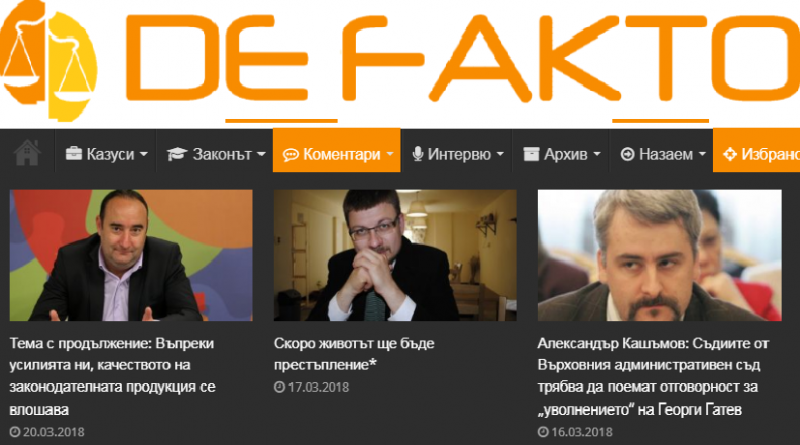 The issue of how the laws in our country are drafted and adopted, especially those proposed by individual MPs, has been our pain for more than 10 years now. Saying “our”, I mean of the scientists, experts, people from the state administration and researchers, brought together around the cause of regulatory impact assessment and fighting for the introduction of the Better Regulation principles. From this prospective the views of some colleagues who, in reaction to Prof. Ognian Gerdjikov’s impressive words, that laws in Bulgaria are “irresponsible”, “populist” and “unprofessional”  were quick to say “Too little too late ” cannot be shared. For me, this statement is rather part of the rubric “More on a topic” in the sense that nothing good has happened during all these years, despite our efforts. On the contrary, the picture is getting worse.

As we in the Center for Regulatory Impact Assessment closely follow the area, I can assure you that Prof. Gerdjikov has spoken before in the same and even more acute style. In 2013, in an interview with Mediapool, he exclaimed:

“As far as lawmaking is concerned, we are complete amateurs. The failures are due to lack of professionalism, lobbyism and sheer nonsense”;

“In recent years, the legislator has been tempted by the burning passion to give legal definitions, some of which by far overshadow the howlers of university applicants.”

But to respond to the level of rigour that today’s young generation has, because you know that contemporary people between in the ages of 20 – 30 look at the world quite differently from us and everything that seems to them ‘not smart’ or that it is not new and modern enough, including rules of conduct, they just reject it and continue staring in their smart device – a phone or a tablet … it will be good to make a few clarifications.

The first is this. Today, Prof. Gerdjikov’s words sting even more, because they have been pronounced more than a year after the Bulgaria has taken steps towards a radical regulatory reform aimed at preventing precisely the negatives that he envisaged and which leave their bad mark on today’s legislation qualifying it as “irresponsible”, “populist” and “unprofessional” which includes the mandatory regulatory impact assessment of all proposals for new and changes to current legislation and the mandatory public consultations. Hence, the facadity of which the professor speaks is not only in terms of the Constitution, but also in terms of the statutory procedures under which laws are adopted and the observance of which is a condition for the validity and legitimacy of these laws. Some of the key elements of radicalism of the regulatory reform were related to the introduction of the new principles of rulemaking, ensuring the objectivity of the legislative process and the inclusion of the so called scientific (expert) evidence in it.

It is not very popular, unfortunately, this is not taught in the law schools in Bulgaria, but since the end of 2016 the drafting of a normative act should be done in compliance with the principles of necessity, validity, predictability, openness, coherence, subsidiarity, proportionality and stability. (These are the eight principles of rulemaking under Article 26 (1) of the Law on the Normative Acts). Do you know which principle is observed today by the Bulgarian National Assembly – the Ninth, and it is the unwritten principle of speedy regulatory decisions, always taken in an emergency, without consultations, without guaranteeing enough time to gather opinions, and it is never clear why hurry … Why is that so, everyone could have his/her answer…

The regulatory reform had to make the legislative process more objective and based on data and evidence. The election system in our country as a combination of procedures for recruiting the staff of the legislature in recent decades has shown exceptional permeability, i.e. the possibility for any person with any background or education, including with only high school, according to the Constitution, as well as by coincidence as the so known “favorite 13, 15 or 18 …” to access this authority of the most important state power, which means preconditions for arbitrary law-making. Addressing this phenomenon meant either a total change in the rules for election by amending the Constitution, or introducing some rules for objectivity by imposing requirements for observing certain principles, using evidence, expertise, and listening to the voice of the people. Almost none of this has happened so far, which means that the reform is still only on paper …

Lastly, the regulatory reform had to make the scientific (expert) evidence mandatory for the legislative process. The problem with the Legislative Advisory Council to the National Assembly is not only that it is just advisory (as a MP said in a legal committee many years ago: “Professor, first win an election like I did, and then you can recommend, now I will decide …”) and that its expertise can be used only when the MPs decide to, but also in the fact that its competence is initially severely restricted because it is explicitly stipulated that the Council: “give opinions on bills adopted at first reading, and on drafts of other acts of the National Assembly.” This constraint is intended to prevent a scientist who has devoted his life to legal science and educated generations of lawyers to tell a lawmaker that there is no need of his/her law, and that the principle of necessity, that is critically important for today’s level of legislative abundance and regulatory inflation, should be respected, and the bill should better go to the trash rather than be submitted. From this point of view, the Council, instead of having a partially corrective role in the state, is initially called to serve as a legitimator of regulatory decisions of already made, even at first reading, which, in view of the advisory nature of its opinions, to a greater extend makes its existence meaningless.

Finally, with regard to some specific legal changes, commented by Prof. Gerdjikov, I would allow myself to add something, with all due respect to him. In connection with the changes in the Commerce Act in force since the end of 2017, which created chaos in the Registry Agency and at the civic market. The problem is not so much with the transfer of an entire enterprise (and the quoted by the Professor Article 15 of the Commerce Act), as with the transfer of shares in a Limited liability company, which is the much wider case in practice (Article 129 CA). Anyway these are specific issues, but the general problem is how new legislation is introduced. There is no data and evidence of how many companies and transactions with transfer of shares are made on a monthly basis, how many citizens and companies will be affected by the legislative change, whether there will be excessive administrative and regulatory burdens, and so on. This is the meaning of better regulation. Moreover, the measures proposed by the National Ombudsman did not take the form of a law to “worsen the life of the business”, but to limit the possibilities for avoiding liability businessmen for unpaid wages, indemnities, social security contributions to their employees who transfer their companies or shares to third parties. First, the business must be heard – how will the small and medium-sized businesses be affected, can the state provide a quick and painless way of checking if a person selling shares owes salaries and social security contributions or not, will the Registry Agency be able to do that for free and electronically, etc. ? This is smart regulation. On the contrary, the legislator, without listening to the stakeholders, without taking into account expert opinions, adopted the changes and suddenly it turned out that there is no authority in the state to certify whether a company owes such payments or not and therefore the burden of doing so was directly transferred to the business.

As to the amendments to the Penal Code and the texts that seek for entirely civic legal relations to be qualified as corruption and persecuted as such, I do not think they are either “irresponsible”, “populist” or “unprofessional” regulatory measures, but something much more serious … They are the last but one stage before starting prosecuting the so called criminal thoughts, when not only life (after Ivan Bregov), but dreams of a better life would be a crime …