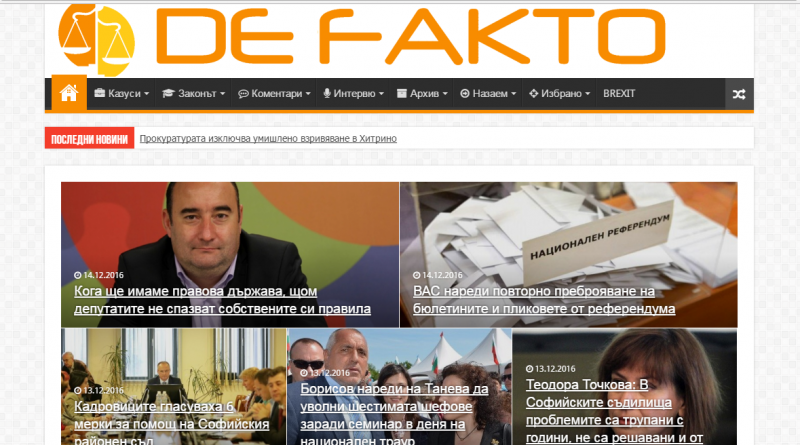 TONY DIMOV: “THE DRAFT OF THE CRIMINAL PROCEDURE CODE WAS ALSO “RUN THROUGH”, DEAR FRIEND KASHUMOV!”

Tony Dimov, President of the Center for Regulatory Impact Assessment

On 13.06.2017 in the National Assembly was submitted a Bill for the Amendment and Supplement of the Criminal Procedure Code, No:702-01-4. The submitter of the bill is тhe Council of Ministers.

The amendments and supplements to the Law on normative acts came into force on 04.11.2016 and laid the foundation for reform in the Bulgarian legislative process. The three main pillars of this reform are the obligatory impact assessment, the obligatory public consultations in a structured form and the check for compliance with the Convention for the Protection of Human Rights and Fundamental Freedoms and the practice of the European Court of Human Rights. The first two pillars are obligatory for all of the drafters and submitters of normative acts, the last one is for the draft laws and codes, submitted by the Council of Ministers only.

From the Internet page of the National Assembly is clear that along with the submitted bill nothing from the following is presented: a report with the ex ante impact assessment, a report on the suggestions, received from the public consultation and a check for compliance with the Convention for the Protection of Human Rights and Fundamental Freedoms and the practice of the European Court of Human Rights. As they are obligatory according to the Law on Normative and Acts and the Rules of organization and procedure of the National Assembly, their absence means the bill shall not be reviewed by the National Assembly until the noncompliance has been rectified. However, the project is assigned to two Standing Committees –  the Committee on Legal Affairs (Committee in Charge) and the Committee on European Affairs and Oversight of the European Funds (Participating Committee) and is adopted at first vote by them on 21.06.2017.

The argument on such “smuggling” of the bill is addressed in the submitter’s letter to the President of the National Assembly, signed by the Prime Minister, which states that the bill was made and coordinated before the entry in force of The Law for Amendment and Supplement of the Law on Normative Acts (SG, № 34/2016) and on the basis of § 9 from its Transitional and Final Provisions shall be adopted under the old rules.

But is this transitional provision even applicable?

We believe, it is not. The purpose of this text was to give an explicit legal framework to the so called ‘pending proceedings’, i.e. so that the drafts of normative acts, which development and concurrence has ended until 04.11.2016 should not have to be returned to starting position. In respect to the bills this means those of them, which have been prepared and ready for submitting to the then acting (43th) National Assembly before the entry of force of the  Law on Normative Acts can be submitted under the old rules. If a different interpretation is made to extend the scope of this provision to the law, this would lead to two legal absurdities.

First of all, the bills drafted and concurred upon the mandate of all previous National Assemblies from 1989 until today would be exempted from the new obligatory institutes in the Bulgarian’s legislature, guaranteeing better regulation such as impact assessment and public consultation. The Ministry of Justice has published on its Internet page at least 4 drafts of the amendment of the Criminal Procedure Code from 21.10.2016, 25.08.2016, 03.07.2015, 14.12.2012. On the Portal for Public Consultations of the Council of Ministers there is another draft from 21.10.2016 published, but none of them is similar to the one submitted on 13.06.2017 in the National Assembly. It is not clear how the submitter proves to the society that the bill has been developed and concurred in the past. And this is supposed to be the reason for the bill not being a subject to an impact assessment, to a public consultation in a structured form and to a check for compliance with the European Convention on Human Rights. This allows the bill to go under the old rules as if nothing has changed, as if there are no amendments to the Law on Normative Acts, introducing EU-approved mechanisms for objectivity and transparency of the regulatory decision-making process, no regulatory reform…The second absurdity is associated with the theoretical and practical “legal death” of all bills submitted in a parliament, that have not been adopted by it on the day of its dissolving. In such a hypothesis the bills submitted to the National Assembly “die”, i.e. they are considered to have never been submitted. At the same time the unsubmitted bills such as the Criminal Procedure Code Bill in question continue to exist beyond the life of the particular government and Parliament and apparently can be submitted to the next National Assembly by the next Council of Ministers without respecting the new rules in our legislature. But does such a broad interpretation of this transitional provision evade the law? In our opinion, it definitely does. The suggested changes in the Criminal Procedure Code are significant and in some aspects can be defined as radical.They are concentrated on accelerating the procedural development in the two phases of criminal proceedings as it offers:  – the introduction of a preliminary session on which the procedural violations in the pre-trial proceedings will be conclusively solved-  eliminates the possibility of termination of criminal proceedings as a failure to comply with its non-essential delay and introduces a procedure to accelerate the proceedings with European standards etc;- the circle of persons who may request to accelerate criminal proceedings is expanded as such rights are granted not only to the accused and to his defense but also to the injured party and the damaged legal person in the pre-trial proceedings.The draft suggests, in view of the competence and its greater specialization, that the Specialized Criminal Court deals with cases of high legal and factual complexity, as well as corruption offenses for which members of the parliament, ministers, presidents of institutions and other public officials are facing the Court.The changes exclude the control by the cassation instance of convictions in private prosecution cases.A set of legal norms is suggested, that aims for an adequate application of the principle ‘ne bis in idem’ in the competition between administrative and criminal liability.The bill introduces the requirements of a number of normative acts of the EU law – directives and framework decisions. For the first time is introduced the regulation of the reference for a preliminary ruling on criminal matters, separated in a separate chapter.At the first reading debates in the Parliament’s committees it was stated that the bill  was prepared by the Ministry of Justice in a working group with the participation of representatives of the Prosecutor’s office, the courts and the bar associations, and was discussed at a meeting of the Council on the implementation of the updated strategy for the continuation of the judiciary reform.Opinions on the Bill by the Supreme Court of Cassation and by the Supreme Bar Council were also presented. Who were the members of this working group? Where are these opinions? What are the results of the discussion?And why is there no impact assessment?Why is there no public consultation under the new rules of the Law on Normative Acts? Considering the importance of the proposed changes, what is the hindrance to hold a wide public consultation with all stakeholders for a minimum of 30 days – publicly and transparently on the Internet, to collect and take into account their contributions? In this way the government could show the public how the European principle of legislation would be applied in our country and then submit the bill to the NA.Why is there no check for compliance with the European Convention on Human Rights and European Court on Human Rights?Why the compiler – The Ministry of Justice has not carried out a check for compliance with the European Convention on Human Rights and the practice of the European Court on Human Rights, as the law obliges it to do? Is it not, as stated in the motives, that this draft of the Criminal Procedure Code aims to observe a number of provisions from the European Convention on Human Rights and requirements of pilot decisions of the European Court on Human Rights? It remains unclear.Meanwhile all the politicians, especially those in government, speak about the most deficient commodity in the politics world – the people’s confidence in them, how they will achieve it in such a lack of transparency and legitimacy of the decisions they make …*The article is written for De Facto. The title of Tony Dimov is a wink to Alexander Kashumov, who recently published a critical analysis of another “smuggled” bill, the one of the Administrative Procedure Code, called ‘A ‘smuggled’ bill without public consultation infringes people’s rights’